I, Bernal Diaz del Castillo, regidor of the town of Santiago, in Guatimala, author of this very true and faithful history, have now finished it, in order that it may be published to the world. It treats of the discovery and total conquest of New Spain; and how the great city of Mexico and several other towns were taken, up to the time when peace was concluded with the whole country; also of the founding of many Spanish cities and towns, by which we, as we were in duty bound, extended the dominion of our sovereign.

In this history will be found many curious facts worthy of notice. It likewise points out the errors and blunders contained in a work written by Francisco de Gomara, who not only commits many errors himself in what he writes about New Spain, but he has also been the means of leading those two famous historians astray who followed his account, namely, Dr. Illescas and the bishop Paulo Jovio. What I have written in this book I declare and affirm to be strictly true. I myself was present at every battle and hostile encounter. Indeed, these are not old tales or romances of the seventh century; for, if I may so say, it happened but yesterday what is contained in my history. I relate how, where, and in what manner these things took place; as an accredited eyewitness of this I may mention our very spirited and valorous captain Don Hernando Cortes, marquis del Valle Oaxaca, who wrote an account of these occurrences from Mexico to his imperial majesty Don Carlos the Fifth, of glorious memory; and likewise the corresponding account of the viceroy Don Antonio de Mendoza. But, besides this, you have only to read my history and you see it is true.

I have now completed it this 26th day of February, 1568, from my day-book and memory, in this very loyal city of Guatimala, the seat of the royal court of audience. I also think of mentioning some other circumstances which are for the most part unknown to the public. I must beg of the printers not to take away from, nor add one single syllable to, the following narrative, etc. 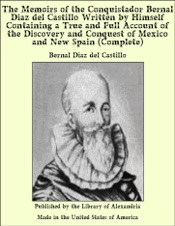